The Grand Hotel in Richmond is lauded as having Australia’s best Pub dining room. Whilst the hotel itself is a pub, and has a public bar, the dining room itself couldn’t be farther from the traditional pub experience. Mood lighting and textural decor make it feel lush and comfortable on arrival – it is the restaurant equivalent of sinking into a deeply fluffy blanket in a quiet corner. It has received one chefs hat from The Age Good Food Guide for 10 years in a row, an astonishing achievement for what could just have easily been the local drinking hole. The dining room isn’t terribly large, which provides a pleasantly intimate atmosphere – so on to what we’re here for, the food. We had the pleasure of enjoying the 6 course degustation, with the dietary request of no seafood. 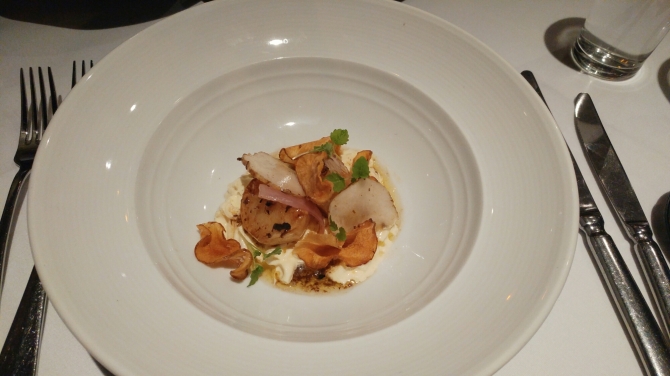 Jerusalem artichokes with Stracciatella and Truffle. A deceptively beautiful dish. The artichokes are presented in three textures, one like a smooth roast potato, another crisp and radish-like, and a third crunchy salty chips. The truffle, of course, can be smelt the instant the plate is presented, and beneath it all the Stracciatella, a creamy, curd like cheese that has more flavour than Mozzarella and just complemented everything. It looks unassuming and sounds simple, but had us licking our forks for the last little bit and wishing it wasn’t over. 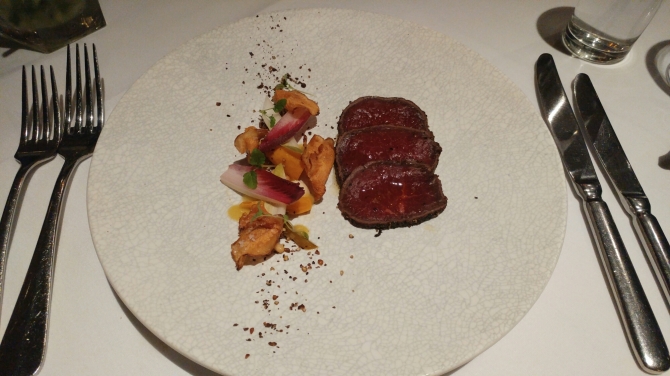 Capaccio of venison with a pepper and juniper crust. The crispy artichoke chips were present here on the side again, a fact we were quite happy with. The venison itself was incredibly tender, and not gamey at all. The crushed spices however, have quite a strong and bitter flavour, which is an enhancement when all the elements are eaten together but quite harsh on it’s own.  Please note that in the standard degustation, this second course is a char-grilled calamari.

Rabbit tortelli with king oyster mushroom.  A pleasant broth, beautifully al dente pasta, and again game meat prepared with a minimally gamey flavour. However, while the taste was nice the rabbit (very finely minced) inside the tortelli had a strange and very powdery texture, so this was probably my least favourite dish of the night, and I didn’t finish it. The entree sized cutlery had been replaced after every course, so when this one was cleared and we were left with mains cutlery, we wondered – would there be 2 more savoury dishes, or would we have 2 desserts? Although quite happy with the potential 2-dessert fate, we did receive a new set of entree cutlery and moved forward with savoury dishes – but weren’t disappointed.

Gnocchi with butter and sage. WOW. This is one of the dishes that has been on the menu for a long time, because it is so well loved, and it’s easy to see why. The gnocchi is definitely up there with the fluffiest, most cloud-like pillows I have ever tried, while the burnt brown butter sauce is so rich and condensed it’s taken on a strong and sweet caramel flavour. A real example of simplicity taken to new heights. I could eat this all day, although it IS very rich. I would most certainly come back here just for this gnocchi. (At this point I was also appreciating the aesthetic consistency of the lovely dinnerware. All similar but not entirely the same, in light and white tones.) Prior to this dish I wasn’t sure I’d be full by the end of the degustation, but gnocchi was the turning point for me as it’s always so filling! Please note that in the standard degustation this course is a fish.

Pork belly with apple, turnips and fennel. And a little treat on the side in the form of Pastilla. While disappointing that the pork belly wasn’t crackling, it was still tender and delicious. After the gnocchi course, however, it was rather rich (but unless opting for no seafood, you would have just had a fish, so the contrast may be helpful). I made my way through this one slowly, mixing rich pork and sauces with bits of fennel and apple. The Pastilla really added to the dish, with it’s crispy texture and spicy cinnamon flavour layered over the richer meat. It was the bite I saved for last! The sweetness of the cinnamon also complemented the pork well, in the same way that apples do.

Our final course satisfied the sweet tooth well, without being sickening. These cream filled Italian donuts were fluffy, fresh, and not too sweet – nor was the toffee ice cream. While the menu states honeycomb we were told this was saffron honey – which sounds even more indulgent. Any saffron flavour was certainly subtle but did lend it a beautiful golden glow.

Overall, I think my personal favourites were the artichokes and gnocchi, because I am a fan of simple dishes done extremely well, but the whole degustation was satisfying and delicious, overall well worth dealing with the parking in Richmond!